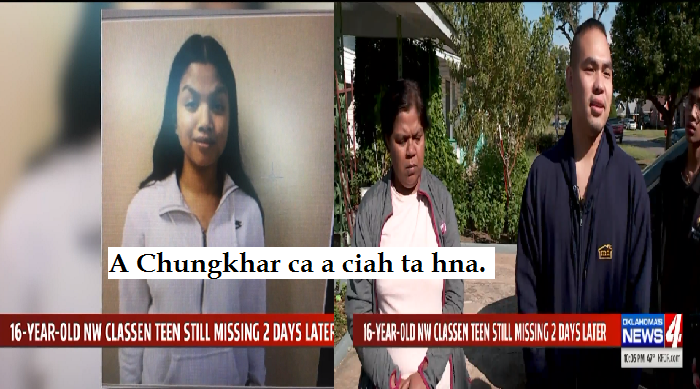 They describe it as every parent’s worst nightmare. Except this is reality for the terrified family of 16-year-old Su Hliang.

For more than 48-hours Su’s mother has had no idea where she is or what may have happened to the Northwest Classen junior.

“Around this month she doesn’t say a lot, she seems sad,” said Su’s uncle Jin Lett.

Making things more difficult in an already hard situation is a language barrier.

Su’s family is from Burma and they’re unable to easily communicate with police, or even the News 4 crew. Another relative was there to translate Burmese for us, saying Su is struggling.

“She is a quiet girl, who doesn`t have a lot of friends. She may be going through depression. She is suffering by herself,” the relative said.

Su was last seen Tuesday. Her family thought it was a normal day. Su went to school at Northwest Classen before heading to a program at Metro Tech. She then went back to Northwest Classen for a school event from which her mother says she never came home. Instead, a note was left behind. Her mother says it was the first time she learned just how much her daughter was struggling

“She is going through depression and feels like she doesn`t want to live in this world. She left in the note the family will meet again in heaven.”